Most Vikings lived their lives as fearless warriors and explorers that were always seeking the next big adventure. They had no fear of the unknown or death because they firmly believe their Gods protected them. In addition to their strong faith, they wore jewellery and amulets that they felt were protecting them from evil forces and bring good fortune to them.
From what we read in the many Viking sagas their amulets and jewellery were indeed the talismans they wanted them to be. Vikings rarely got sick even though they lived in an area in which the sun was a rare commodity, giving space to long and cold winters. They fought battles in which they were often outnumbered, and in lands, they set foot for the first time. Even with all those disadvantages, they were victorious in most of those battles. There is also evidence that they sailed the Atlantic Ocean and discovered America a long time before Christopher Columbus. All that in their relatively small ships! Something that even today is hard to imagine.
Was the secret of their success and endurance in their amulets and talismans?
Here we look at some of the most prominent examples and explain their symbolism. That way you can also have the luck and endurance of a Viking warrior.

The word walnut comes from the Old Norse word “valid” meaning “slain warriors” and knut, meaning “knot”. The three interlocked symbols represent Odin and his power to bind and unbind. Odin, the most powerful Norse God, had the power over the mind of warriors. He could lay bonds over their mind and make them helpless in battles, or he could do the opposite – make them fearless and ferocious warriors.
Vikings wore it to give them strength over their enemies. Today, it is also a symbol of Viking power and strength.

The Viking Compass is an amulet that had the power to guide anyone that has wandered away and did not know how to go back home. Also, it was often drawn on their ships before setting sails. That way they were sure that they would return home safe and sound.
Even today people wear it and believe it can help them find their way if they are lost.

The hammer of Thor is considered to be one of the most significant and authentic symbols of the Viking era. There are several interpretations of the meaning of Mjöllnir. Some suggest that it means white, others lightning, and there are those that think its meaning is closer to crush or crushing.
However, what’s common for all of the suggestions is that they are closely related to the symbolism of Thor’s hammer. The legend of Thor’s hammer says it was not just a weapon, but also a tool that served many other purposes. For example, it is said that it had been used to bless marriages and bless the newlyweds with fertility.
Viking warriors carried it around their necks as an amulet to protect them during their raids and battles. The tradition of wearing the Mjöllnir lived on even when Vikings turned to Christianity. Christian Vikings wore the Mjöllnir next to their crosses.

Yggdrasil sits as one of the most important symbols of the Norse religion. Yggdrasil, known as the tree of life, was believed it connects nine realms or nine worlds:

Also, the tree of life is said to provide life and eternal youth for the Nordic Gods.

The Triple Horn of Odin 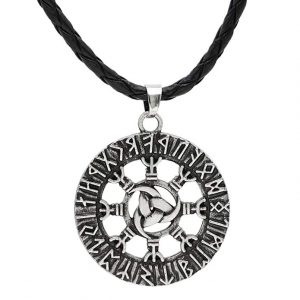 The horn of Odin consists of three interlocking horns representing Odin’s quest for the mead of poetry. According to Norse mythology, two dwarfs named Galar and Fjalar killed Kvasir (a God that knew everything about everything) and mixed his blood with honey. The mix that was poured in the three horns. The legend says that Odin outsmarted the great giant that kept the horns safe and drink from it for three days straight.
Nowadays, the horn of Odin serves as a symbol of inspiration and wisdom.

Skuld’s Net (The Web of Wyrd) 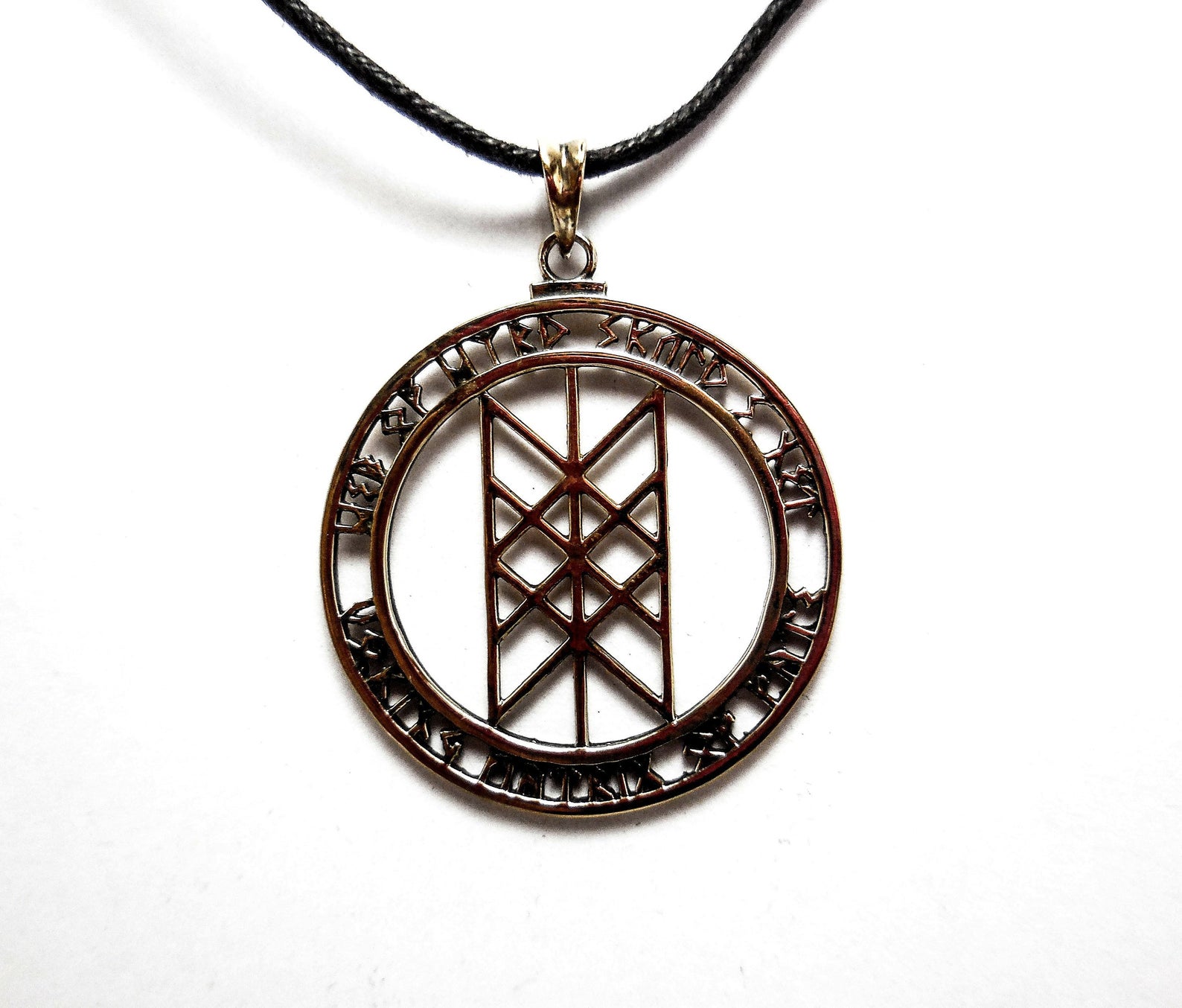 This is one of the lesser-known symbols of the Norse religion, but very intriguing and interesting. It represents the connection between the past, the present, and the future. The legend says that it was woven by Nornir/Norns, the Gods of destiny. It is made of nine staves that symbolize “all the possibilities” that the present, the past and the future might bring or brought.
It was believed that it had the power to influence the future and bring good luck to its bearer.

It might not be the most well-known one, but it is definitely the most authentic representation of the Viking culture. The Svefnthorn is even mentioned in some of the most famous sagas: Gongu-Hrolf’s Saga, The Saga of King Hrolf Kraki and Volsungs Saga.
Both Gods and kings used this powerful talisman as a weapon to send their enemies into a long and deep sleep. There were other magical qualities that it supposedly possessed, but putting people into involuntary sleep was the most notable one.

Frithiof's Saga - An Epic Tale of Love and Pride

The Significance of Valknut and Mjolnir in Viking History and Today

Berserkers Too Violent Even for Viking Standards? - 10 Shocking Facts

The most extensive list of must see museums for viking aficionados

The Family Life of Vikings